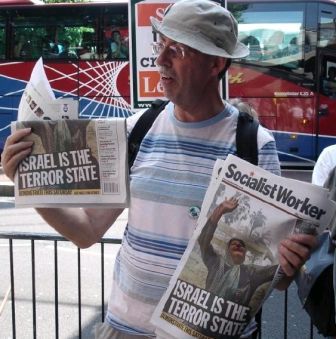 On themselves, if only for a moment: “…SWP members are simply inadequate to the task of building a revolutionary party: we are a collection of eccentrics, dilettantes, malcontents and middle-class do-gooders, incapable of relating to workers and the oppressed, and consequently without roots in the class or local communities.” Here.

On the Holocaust: “…thousands of LGBT people, trade unionists and disabled people were slaughtered…” Any Jews, at all? Here.

On antiracist Jews and antisemites: “…an illiterate, conservative, superstitious Muslim Palestinian peasant who supports Hamas is more progressive than an educated liberal atheist Israeli who supports Zionism (even critically).” Here.

Jon Pike on the SWP in the UCU: “Take away the substance – and what you’ve got is a typical fake-left union bureaucrat, making demagogic speeches to the zealots at the seaside, then quietly burying an unworkable policy in the autumn. Only this time the fake left bureaucrat is Tom Hickey, a leading member of the SWP.” Here.

SWP pulled the plug on the boycotters last year too: “And, as if by magic, a couple of days after Callinicos had announced the Central Committee’s change of line in Socialist Worker, the boycott campaign finally and spectacularly collapsed, following the UCU lawyers reporting that the campaign would violate equal opportunities law. The union’s Strategy and Finance Committee voted unanimously to end the union’s flirtation with the boycott, and Tom Hickey, a member of that committee, was mysteriously absent and so did not vote.” Here.

SWP whitewash Gilad Atzmon: “As the organisers of the Cultures of Resistance event we were disappointed to see Michael Rosen claiming that Gilad Atzmon is an antisemite and should therefore not have been invited to perform…” Here.

One Response to “Socialist Worker Party”