No place for a gallery on the Holocaust in the new Canadian Museum of Human Rights? 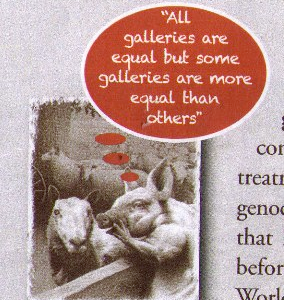 The Canadian government is building a Museum of Human Rights in Winnipeg.  In this museum it is proposed to found a gallery on the Holocaust, and on the effect that the post Holocaust settlement had on the international idea nd practice of Human Rights.

There is a large Ukranian community in Canada, and among that community is a nationalist campaign against this “centering” of the Holocaust in the story of the development of human rights.

Per Anders Rudling, a scholar who has taught in Canada and is a specialist in Ukranian nationalism, has, with colleagues, written the following open letter, which he is asking scholars and academics to sign.  Please use your academic email address and send details of your name, position and institution to him.  rudlingp@uni-greifswald.de

Catherine Chatterley, the director of the Canadian Institute for the Study of Antisemitism has written this op-ed explaining the issues.

This is the proposed text of the open letter:

The Ukrainian Canadian Civil Liberties Association and the Ukrainian Canadian Congress have been campaigning against the plans of the Canadian Museum for Human Rights in Winnipeg to mount a permanent Holocaust gallery. The UCCLA has mailed out a postcard across Canada that reproduces the cover of an edition of George Orwell’s Animal Farm and implies that supporters of a Holocaust gallery are pigs. For its part, the UCC, which, in contrast to the UCCLA, is an elected body that represents major Ukrainian Canadian organizations, has complained that the planned Holocaust exhibit is “unacceptable” and has asked the Museum to provide the Holodomor, or Ukrainian famine of 1932-33, “no less coverage… than the Holocaust.”

We, the signatories to this letter, have all studied various aspects of genocide, fascism, anti-Semitism, Stalinism, war criminality, the Holodomor, and the Holocaust. We unequivocally recognize that the violence and oppression that Ukraine has experienced during its multi-totalitarian past ought to be remembered and commemorated in a Canadian museum devoted to the history and abuse of human rights. What we object to is the dishonest manner in which the UCCLA and UCC have distorted historical accounts of the Holodomor while at the same time refusing to acknowledge the Ukrainian nationalist movement’s role in the Holocaust.

The Ukrainian famine, which constitutes one of Stalin’s great crimes and one of Europe’s most devastating tragedies, deserves a place in any venue dedicated to commemorating and understanding the violation of human rights. Yet the way the UCC treats the Holodomor is problematic. All demographic studies place the number of famine deaths in Soviet Ukraine in the range of 2.6 to 3.9 million. This is, in itself, a grievous toll. Nonetheless, the UCC has, at times, inflated the number of victims to seven or even ten million. The implication is obvious: seven or ten million is more than six million; the Holodomor deserves more attention than the Holocaust. Such a manipulative attempt to exploit human suffering is reprehensible and should not be acceptable to the Canadian public.

We are also troubled by the UCCLA and UCC’s attitude toward the OUN, the UPA, and the 14th Grenadier Division of the Waffen SS ‘Galicia’ (1st Ukrainian). OUN stands for the Organization of Ukrainian Nationalists. UPA is the Ukrainian abbreviation for the Ukrainian Insurgent Army, the armed branch of the OUN. The Galicia Division, a military unit that was primarily involved in counterinsurgency activities, was established by the Germans in 1943. Tens of thousands of Ukrainians who belonged to these formations perished while resisting the ruthless imposition of Soviet power at the end of the war. Today many Ukrainians revere the members of these organizations as the champions of an oppressed people. In February 2010, the UCC called on the Canadian government “to make changes to Canada’s War Veterans Allowance Act by expanding eligibility to include designated resistance groups such as OUN-UPA.” Last Remembrance Day, the UCC asked Ukrainian Canadians to honour veterans who belonged to OUN, UPA, and the Galicia Division.

In their calls to honour the members of these organizations as veterans, what the UCCLA and the UCC do not fully acknowledge is that all three groups have been implicated in violence against civilians on a massive scale. Significant historical research indicates the political responsibility of the OUN in anti-Jewish violence in the summer of 1941. Emerging research also demonstrates that many former policemen who aided the Nazis in genocidal operations subsequently joined the UPA, created in early 1943. Moreover, it is incontrovertible that the UPA murdered tens of thousands of civilian Poles in the western province of Volhynia to undercut the ability of postwar Poland to make claims on the area. The Galicia Division was also involved in anti-civilian military actions, although mainly outside of Ukraine.

By pointing out the historical record of the OUN, UPA, and the Galicia Division, we do not mean to suggest some sort of collective responsibility for genocide on the part of all the men and women who served in them, and certainly not on the part of all Ukrainians. Nevertheless, in an age when the mass murder of civilians is regarded as a crime against humanity, the mixed record of these organizations has to be openly debated, particularly when the significance of the Holocaust is being questioned in a public campaign pertaining to a fair representation of the history of human rights.

We therefore assert that since the UCCLA and UCC have not understood that confronting the historical record openly and honestly is preferable to manipulative falsehood, have engaged in a competition of suffering, and have failed to acknowledge both the vices and the virtues of the nationalist movement, they ought to stay out of a debate about the Canadian Museum of Human Rights.

Per Anders Rudling, a scholar who has taught in Canada and is a specialist in Ukranian nationalism, has, with colleagues, written the following open letter, which he is asking scholars and academics to sign.  Please use your academic email address and send details of your name, position and institution to him.  rudlingp@uni-greifswald.de

Catherine Chatterley, the director of the Canadian Institute for the Study of Antisemitism has written this op-ed explaining the issues.

For more background information on the campaign in Eastern Europe to normalize the memory of the Holocaust, see the excellent www.HolocaustInTheBaltics.com

2 Responses to “No place for a gallery on the Holocaust in the new Canadian Museum of Human Rights?”

« George Galloway… What can you say?
Palestinians tell British union: Don’t sever ties with the Histadrut »
%d bloggers like this: