This piece by Karen Glaser is from Jpost.com. 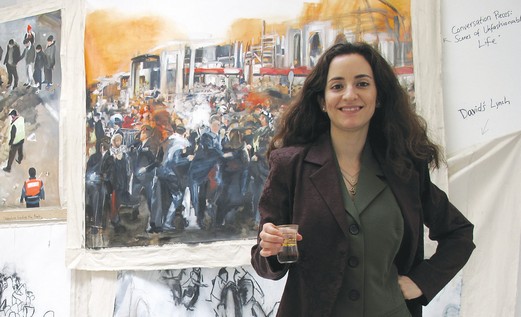 Noam Edry decided to challenge demonization against Israel on her campus in her own creative way by breaking taboos through ‘zionist’ art.

That this Israeli artist has ruffled British feathers is obvious from the moment I walk through the door of the world-famous art college.  “I’ve come to see Noam Edry’s show. Could you direct me?” I ask the student- steward at reception.  “Just follow the noise,” she replies with an ironic smirk. “It’s impossible to ignore.”

Actually it’s more complicated. “Conversation Pieces: Scenes of Unfashionable Life” is an installation comprising paintings, drawings, video, sound, sculpture and performance that look at the Arab-Israeli conflict through the artist’s Jewish-Israeli eyes. In so doing, it tries to challenge the ways in which people arrive at their political opinions.  A lot of the individual exhibits are ambiguous and open-ended. But knowing how reviled the Jewish state has become on many British campuses, and preempting, surely, her detractors, Edry herself writes: “Call it a Zionist show, call it what you like.” She is, in short, being provocative.

You could see this provocation as a riposte to months of antagonism from the other side. When Edry moved to London to start her master’s in Fine Art, following a first degree at the Bezalel Academy of Art and Design, she thought she was on reprieve from the Middle East. The world’s most bitter conflict was certainly the last subject on which she expected to be making art.  “I had always thought of myself as apolitical,” she says. “I was sure of one thing only – that the conflict was not as simple or clear-cut as a black-and-white painting.”

But then, on her first day at Goldsmiths, the Ramat Yohanan kibbutznik was assailed by posters at the university calling her homeland an apartheid state.

It was a punch to the stomach: “Apartheid? In what way? I had gone to art college with Arab artists where we had built our exhibitions side by side. Before that I had served in the army with Beduin, sharing the same awful, oily food and consoling ourselves with Arab coffee that we brewed for each other in makeshift pots. My army commander was a Druse.”

EDRY’S INITIAL response was to lie low, a tactic that most Israelis at Goldsmiths, of whom there is a good handful every academic year, employ for the duration of their degrees. During her first year, she never brought up the Israel-Palestine question, and she certainly didn’t make art about her Israeli identity.

But it didn’t work. Edry was constantly confronted about the conflict – on the way back from a party, over lunch or a cup of coffee in the student union bar. And there were ever more posters plastered on the university’s walls – ostensibly about her homeland, but actually depicting a place that was “barely recognizable, so crass was the misrepresentation.”

When she attended a meeting of the Palestine Twinning Campaign, it felt, she says, like the clock had rewound to 1939.  “I was expecting real dialogue, but instead they were calling for an academic boycott of Israel, rallying young people who were desperate to be passionate about something to silence people like me – artists and intellectuals who believe in human beings and mutual tolerance, the very people who are, in fact, the real hope for peace in the region,” she says. “I was horrified.  What next? Would they start burning Israeli books?”

Not yet. But what she did next was to make a complex work challenging the relentless campus demonization of the Jewish state.

The show begins in a corridor outside the studio, where Jewish Israelis serve Arab-Israeli coffee to members of the public while wearing, and giving out, T-shirts with the slogan “I come from the most hated place on earth” – continuing on the back, “second to Iran.” Before you enter the room, a security guard checks your bag; he’s part of the show, but for me, at least, it took time for the penny to drop.  Inside, there is a massage therapist rehabilitating volunteers’ left sides.

The noise to which the student-steward sniffily referred comes from various sources: a video installation screened on an ’80s portable television, entitled Groovy Little War Mix and featuring war footage (including a simulated bombing of Goldsmiths College) mixed with music that scratches back and forwards; another video of Edry talking about her work; and a live performance that includes a screaming woman running into the room before hysterically throwing herself on the floor and disappearing in what looks like a pile of mud. Two words spring immediately to mind: suicide bomb.

THE STEWARD isn’t the only person to object to the volume. Students in neighboring studios have complained that her noise is “infiltrating our space.” And a visiting gallerist asks her how she managed to get such a big room for her show. Not everyone understands her ironic answer to both questions: “I am Israeli. What do you expect?”

Irony born of bitter experience. When she was preparing her show, several of her tutors nicknamed her “The Zionist Terrorist.” She thinks they were being playful, but it can’t have been much fun. Other teachers said that because they disagreed with her political persuasion, they found it hard to discuss her ideas with her. To which she replied: “But this work is not about the politics of the Middle East – about who is right and who is wrong.”

Despite this, she says her tutors have generally been supportive and, more important, genuinely intrigued by the finished work. “They have certainly been asking me lots of questions. It shows, I think, that you can make art from an unpopular political position and it can still affect people and be open-ended.”

This open-endedness also affects, and baffles, many of the thousands of visitors who come to see her show. Yes, thousands.  This year at Goldsmiths, it is a Bezalel alumnus who has the art world talking – in all directions.

Here’s one exchange.  Visitor: “I don’t want to offend anyone, but I am pro-Palestinian. What position are you?” Edry: “Well, have a coffee, walk around and see what you think.” Visitor, after her walk-around: “You know, I don’t understand this issue of homeland. It’s not in my DNA, I’m Australian. l think I still have my prejudices, but maybe that’s because my friends are all pro-Palestinian. But I do, er, hate Zionists [pause]. Well, you wouldn’t be in favor of what’s happening in your country, that’s for sure… I guess?”

Or the man who comes in shouting, “This is just all propaganda! Everything you say about Hamas is rubbish [although nothing is directly said about Hamas in the piece]. I know what Israel is like. I read the papers” – but who, after extensive conversation with the coffee-stand volunteers, leaves saying, “Okay, maybe, I don’t know.”

And the student who tells Edry, “You seem to me to be someone who supports the demolition of Palestinian homes.” “Really?” she asks. “Why do you say that? Do you see that in my work?” “I don’t know,” the student says. “I can’t quite put my finger on it.”

Meanwhile, other Brits, perhaps more ignorant about the Middle East than they realize, can’t quite put their finger on the artist’s ethnicity, asking, “Are you Israeli or Palestinian?” And they certainly don’t know what to make of ironic graffiti such as “Zionist prick” and “The bad guys are coming.” The Hebrew graffiti scrawled across walls is, naturally, even more confusing. “For me, just writing in my mother tongue was to break a big taboo,” says Edry. “ As was writing the word ‘Zionist.’ I felt so good when I had done it.”

TABOO. THE word goes to the heart of this artwork. Zionism is arguably the most unpopular ideology in art circles, and Goldsmiths – the alma mater of artists such as Damien Hirst and Sarah Lucas – is at the center of the British art world. The London University college is also the birthplace of Engage, a campaign against academic boycotts of Israel, founded by sociology lecturer David Hirsh; its website has become a crucial resource for countering anti-Semitism and anti-Zionism in British academia.

However, it’s fair to say that most Israeli artists at Goldsmiths deal with the discomfort of campus anti-Zionism by either keeping quiet or joining in the criticism – which some would call self-abnegation.

Edry has done the precise opposite. “In my first year at Goldsmiths, I felt voiceless. I saw the daily delegitimization of my country, the dehumanization of the place which made me who I am, and I felt powerless. I didn’t have the words, the flashy slogans and the fashionable labels,” she recalls. “This work has been my voice. I have forced dialogue to take place and I have shown Israel’s detractors the faces of the people [the coffee-stand volunteers] affected by their hate campaign.  There is now an Israeli voice in Goldsmiths, and it’s loud and won’t be silenced.”

And in the process, she has also been given a voice in her native land. Since the Goldsmiths show, there has been interest aplenty from British and American galleries and art collectors. This week, the artist also had calls from two major Israeli museums. In her (noisy) video, she says she thinks her kind of political art will ruffle Israeli feathers, too. We’ll see.

This piece by Karen Glaser is from Jpost.com.