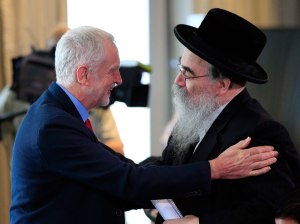 Today we get to learn more about what Corbyn thinks about his responsibilities in what we are assured is his affirmed opposition to all kinds of racism. Many of his supporters think it is apologising and smiling at visibly Jewish people.

The Jewish establishment, which has often reluctant to rock the boat on antisemitism, has been shaken into action. The straw which broke the camel’s back was the revelation that, in one of his Facebook groups where antisemitic material is shared, Corbyn supported an artist whose antisemitic mural was threatened with erasure from Brick Lane in London. The mural, titled ‘Freedom for Humanity’ depicted not contemporary capitalists but instead men from a different time, with stereotypically Jewish features indistinguishable from Nazi propaganda, playing on a Monopoly board balanced on the backs of darker-skinned men. Then-Tower Hamlets mayor Lutfur Rahman said “the images of the bankers perpetuate antisemitic propaganda about conspiratorial Jewish domination of financial and political institutions”. Corbyn supported Mear One on Facebook at the time, saying the erasure was motivated by pro-capitalist politics not anti-racism. That was back in 2012. Luciana Berger MP raised the matter this week.

The number of apologies coming from Corbyn, and the torrent of abuse and scorn that campaigners against antisemitism are subjected to in the name of supporting him, are testament to the failure of the Labour leadership to address antisemitism.

So the Jewish Leadership Council and the Jewish Board of Deputies have called a rally today Monday 26th 5.30 in Parliament Square to present this letter to the Parliamentary Labour Party. Update Corbyn has issued this response which recognises antisemitism in the Labour movement but makes no specific undertakings.

So turn up today:

Naturally, Jewish Voice for Labour and Free Speech on Israel are marshalling their supporters to a counter rally. Being contorted Israel-firsters themselves, they will push a tiny, very loud, minority of Jews to the front but they aren’t fussy about their supporters who consequently will include antisemitism apologists and antisemites [Update – it did and here is one of them]. Their aim is to teach us how to discredit the majority of Jews who are trying to raise the alarm about growing antisemitism, and they can succeed unless there is plenty of education to the contrary.

So, get stuck in, always with civility. Call on JVfL and FSoI to stand down. Call on Corbyn, the Labour leadership, and your own MP to welcome today’s campaigners against antisemitism and thereby demonstrate support for the UK Jewish community. He needs to act on his words now. He needs to support Jews against antisemitism even if he, like Livingstone, has written them off as agreeing with him politically.

Labour MPs who aren’t bystanding and who stand on the right side of this include [updated] Ian Austin, Luciana Berger, Wes Streeting, Louise Ellman, Jess Phillips, Ruth Smeeth, Stella Creasey, Mike Gapes, John Mann, Nia Griffith, Preet Kaur Gill, Chris Elmore, Thangam Debonnaire, Chi Onwura, Toby Perkins, Phil Wilson, Chuka Umunna, Yvette Cooper, Harriet Harman, David Lammy, Kate Green, Holly Lynch, Joan Ryan, Margaret Hodge, Liam Byrne, and Stephen Morgan. There are plenty more. These are people who are also used to standing against other forms of racism and they know the ropes. But they need your support, since they are currently on the receiving end of a world of antisemitism themselves.