Jeremy Corbyn often takes sides with antisemites against Jews. The picture on the right shows Jeremy Corbyn making his comments about Zionists having difficulties with ‘English’ irony, with Sizer in the audience. In 2012, Corbyn wrote a letter to Sizer’s Church saying:

“Reverend Stephen Sizer seems to have come under attack by certain individuals intent on discrediting the excellent work that Stephen does in highlighting the injustices of the Palestinian Israeli situation, in particular by his very thorough analysis of “Christian Zionism”. Might I suggest that such criticism is part of a wider pattern of demonising those who dare to stand up and speak out against Zionism, a philosophy that precludes the existence of the state of Palestine?”

“Your own expertise, wisdom and experience will, I am sure, allow you to appreciate just how much distance exists between anti Semitism, anti Zionism, and anti Israeli government actions for that matter. Overzealous critics find it convenient to conflate them all. Active and well informed individuals such as Reverend Stephen Sizer, withstand a considerable amount of inappropriate criticism. Indeed many MPs and Peers are also attacked.”

“… I do admire the excellent work that he does and personally, I would give no credence at all to any claims that he is anti-Semitic.”

The claim that “Zionism” is “a philosophy that precludes the existence of the state of Palestine” is both untrue and clear evidence of Jeremy Corbyn’s real view on the Israel/Palestine conflict. He now presents himself as a supporter of a two state solution but in 2012, he is clear that he believes the existence of Israel itself to be incompatible with Palestinian freedom.  In truth, of course, many Zionists have spent decades fighting for the creation of a Palestinian state alongside Israel. 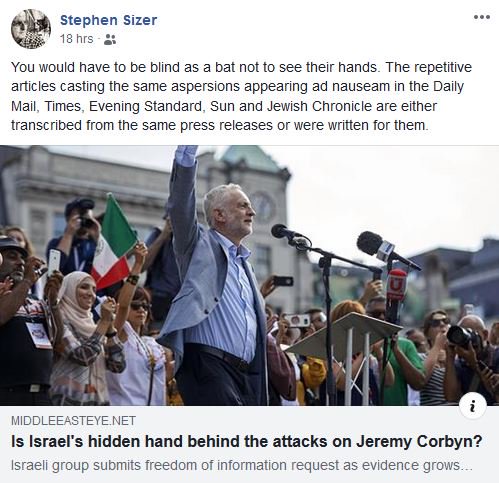 “You would have to be blind as a bat not to see their hands.  The repetitive articles casting the same aspersions appearing ad nauseam in the Daily Mail, Times, Evening Standard, Sun and Jewish Chronicle are either transcribed from the same press releases or were written for them.”

In 2015 Sizer had been banned by the Church from participation in social media after he promoted an antisemitic article on his Facebook feed entitled: ‘9/11: Israel did it’.

Sizer did not need Jeremy Corbyn’s 2012 letter of support because he had been critical of Israel but because he had been strongly criticized by the Council of Christians and Jews for publishing antisemitic articles on his facebook feed from what the CCJ correctly described as “obscenely antisemtic” websites; and for persistently refusing to take the articles down when he was informed of the antisemitism issue with them.

Jeremy Corbyn leapt to Sizer’s defence in 2012 and Corbyn has refused to re-assess this defence in spite of the issue being raised on many occasions since he moved into the centre of the public spotlight; and as Sizer’s more explicitly antisemitic material emerged, Corbyn remained silent.

Antisemitic conspiracy theory has always portrayed Jews as working together, in secret, for their own selfish tribal purposes and it interprets the actions of each Jewish person as being dedicated to the whole secret Jewish collective. It sees a plurality of actual Jewish people, often disagreeing wholeheartedly with each other, and it makes out of them a fictional entity which may be called ‘The Jews’ or ‘The Zionists’ – this fictional entity acts as one against the interests of the wider community.

It is true that currently there is an unprecedented consensus amongst British Jews, manifested in the diverse institutions of the Jewish community, that there is a problem of political antisemitism in the Labour Party and that it is related to the politics and political tradition of the Corbyn faction.

But those who still support the Jeremy Corbyn leadership, in the face of mounting evidence that he is compromised by his association with antisemitic politics, need to find ever more elaborate ways of explaining what is going on.

Sizer sees a consensus of Jews who agree, more or less on the central issue, and he sees a diversity of different Jews, and non-Jewish allies, writing, speaking, worrying, organising – and he takes this as evidence of conspiracy.  He says it is organised secretly from behind the scenes by Israel.

The story is that Israel is at the heart of a web of lies, spun to silence criticism of its human rights abuses.  Everyone who ostensibly worries about antisemitism, says this story, is really only pretending; really they know it isn’t true; really they are in a conspiracy to get rid of Corbyn; not because he’s antisemitic, he isn’t; but because he opposes Israel’s cruelty.

In this way Israel becomes the big powerful aggressor; and the Leader of her Majesty’s opposition and the resources of the whole Labour movement in Britain become the powerless victims.

Antisemitism always portrays itself as the victim of the powerful Jews.

Steven Sizer has been doing this for years.

In 2006 he wrote a letter to The Independent responding to an argument by the Chief Rabbi that the campaign for boycotting Israel was part of an emerging antisemitic culture in the UK. The Synod of the Church, wrote Sizer, would not be ‘intimidated by those who … cry “antisemitism” whenever Israeli human rights abuses in the occupied territories are mentioned.’ He went on: ‘Why has the Archbishop faced a torrent of criticism over [a vote to divest from Caterpillar]? Simple: the people in the shadows know that Caterpillar is only the first [boycott].’

Sizer responded to an argument that BDS was antisemitic by alleging that the argument was made in bad faith ‘by the people in the shadows’, in order to unfairly de-legitimize criticism of Israel and the occupation.