It isn’t that complicated.

The debate, hosted on Engage, concerning the South African campaign to boycott Israeli academia is here.

The to and fro in the South African Jewish Report is helpfully summed up on the JFJFP website here.

And a couple of responses this week:

DAVID HIRSH asked Ran Greenstein why the University of Johannesburg singles out an Israeli university for boycott. Greenstein’s reply is that the British government has imposed sanctions against a whole lot of other countries. I don’t understand what the record of the British government has got to do with UJ’s decision to single out Israel, and only Israel, for boycott.
Richard Gold, Manchester, UK

People will have heard about the poisonous atmosphere on campus in which debates concerning Israel and Palestine take place, but last week they had the opportunity to sample it for themselves on the pages of the SA Jewish Report.  Prof Ran Greenstein, a fellow sociologist, says that for me neither words nor reality matter; he says I’m afraid of equality and democracy. He characterises my academic work on anti-Semitism as a campaign to manufacture hysteria and distortions. In other words, I don’t just get it wrong, I’m getting it wrong on purpose.  Ran referred, on a public website, to one of the Jewish Report’s journalists as “some stupid hag in a rag”.  Why do we see such a departure from the norms of rational debate which usually insist that a person is treated with respect when the truth or falsity of what they say is addressed?

It seems to me that it is no accident that this departure accompanies a campaign to single out Israeli academia for exclusion from the global academic community. Israeli universities are to be boycotted, not because of anything they do, or say, but because they are Israeli.  The boycott campaign, which exists to silence the voices of Israeli academia, prefers angry denunciation to answering the arguments of its critics.

Deborah Lipstadt on the YIISA Closure 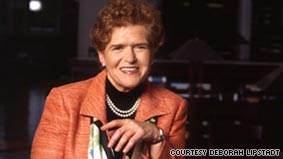 This piece, by Deborah Lipstadt, is from The Jewish Daily Forward.

When the news of Yale University’s decision to close its Initiative for the Interdisciplinary Study of Antisemitism was first made public in early June, the sector of the blogosphere that addresses Jewish issues began to buzz. Discussion, charges and accusations flew. Yale’s critics praised YIISA as a beacon of academic scholarship that had made a significant contribution to this field of study. They charged Yale with caving in to pressure from Arabs and Muslims, both on and off campus, who could not abide the way in which YIISA boldly shone a spotlight on Muslim anti-Semitism. To these people, it appeared as if anti-Semitism itself had brought down an educational institution devoted to the study of this terrible malaise. I registered my initial response on Twitter, describing the shutting down of YIISA as a strange, if not weird, decision and wondering what had happened.

Yale’s response to the wave of criticism constituted a classic reminder that even a place populated by exceptionally smart people can shoot itself in the foot with deadly accuracy. The university defended itself against charges of having succumbed to Muslim pressure by listing the Jewish studies courses taught at the school and stressing its extensive library holdings in the field. (Yale, admittedly, does have an excellent Jewish studies program, and its libraries have one of the best collections in Jewish studies worldwide.) Yale’s clumsy response constituted, as one blogger put it, the academic equivalent of, “Some of our best friends are Jews.”

There is, however, another side to this story. Apparently, there were people on the Yale campus who were associated with YIISA and who were eager to have it succeed. These friends of YIISA counseled the institute’s leadership that some of its efforts had migrated to the world of advocacy from that of scholarship. They warned YIISA that it was providing fodder to the critics’ claim that it was not a truly academic endeavor.

I have twice participated in YIISA’s activities. I gave a paper at one of its weekly seminar sessions on Holocaust denial and attended its conference last August. While serious scholars who work in this field gave the vast majority of the papers — and not dilettantes who dabble in it — there were a few presentations that gave me pause. They were passionate and well argued. But they were not scholarly in nature.

According to sources at Yale, the university’s leadership unsuccessfully worked with YIISA in an attempt to rectify some of these issues. Part of Yale’s discomfort might have come from the fact that a Yale-based scholarly entity was administered by an individual who, while a successful institution builder, was not a Yale faculty member and who had no official position at the university. Yale has indicated that it is intent on axing YIISA and replacing it with an initiative that will address both anti-Semitism and its scholarly concerns. It is crucial that it do so particularly at a time when anti-Semitism worldwide is experiencing a growth spurt.

Two lessons can be drawn from this imbroglio. First, there is a real need for serious academic institutions to facilitate and encourage the highest-level research on anti-Semitism. (Currently, the only one that exists is at Indiana University, under the leadership of Alvin Rosenfeld.) These institutions could explore why hatred persists even after the Holocaust starkly demonstrated what it could “accomplish.” What about anti-Semitism makes it so malleable that it is able to re-create itself in such a wide array of settings, cultures and ages? They might also ask why the world’s oldest hatred has recently been so little studied and analyzed. Exploring that conundrum is something a first-rate academic institution is uniquely qualified to do. Moreover, this research must focus not just on Christian anti-Semitism, but on Muslim anti-Semitism, as well. Today there are few universities where a young scholar who worked in this field would be granted a position or tenure irrespective of how bright and talented she is. This, too, is something well worth exploring.

After cutting-edge academics have shed light on this issue, communal organizations, the Anti-Defamation League and the American Jewish Committee among them, that are so adept at creating strategies to address the problem will have the diagnosis they need in order to help them move ahead with their work.

Second, this struggle also demonstrates the necessity of differentiating between those who do advocacy and those who do scholarship. Both are critical — but entirely different — endeavors. Let us not forget how rightfully disturbed the Jewish community has been in recent years about the way in which advocacy and polemics have permeated so many university courses on the Middle East. Too many students who take these classes find that they have entered a zone in which advocacy masquerades as scholarship. This is unacceptable, irrespective of the source from which it emanates.

Deborah Lipstadt, Dorot Professor of Modern Jewish and Holocaust Studies at Emory University in Atlanta, is the author of The Eichmann Trial (Nextbook/Schocken).You can follow her on Twitter @deborahlipstadt

This piece, by Deborah Lipstadt, is from The Jewish Daily Forward.

Yale project is the victim of a menacing zeitgeist – David Hirsh

Neither the Yale Initiative for the Interdisciplinary Study of Antisemitism (YIISA) nor the European Monitoring Centre on Racism and Xenophobia’s (EUMC) working definition of antisemitism are perfect but they are vilified more for what they get right than what they get wrong.

Both are being dumped, one by Yale University, the other by the University and College Union. Anti-zionists who fear critical examination of the relationship between hostility to Israel and antisemitism are now happy. They say there is a conspiracy to smear critics of Israel as antisemites and they think that YIISA and the EUMC are parts of the “Israel lobby”. The fact that this mode of thinking appears plausible at the moment is a measure of the seriousness of our current situation.

The truth is more interesting, complex and surprising than the antisemitic fantasy. Until the 1960s, Yale was a white, waspish institution with a Jewish quota. But recently, YIISA has been a global centre for the scholarly discussion of contemporary antisemitism. It has hosted everybody, in an eclectic maelstrom of political and intellectual energy; academics, activists, journalists, lawyers and politicians.  [This following passage was cut by the JC – DH]  Robert Fine, Moishe Postone, Brian Cheyette, Lars Rensmann, David Seymour, Annette Seidel-Arpaci, Michael Waltzer, Catherine Chatterley, David Feldman and Martha Nussbaum all went to YIISA, radical antiracist scholars, who understand that critical theory was forged in the crucible of the struggle against antisemitism.  Dovid Katz, expert in the antisemitism which is portraying Holocaust perpetrators as anticommunist partisans; Deborah Lipstadt and Anthony Julius, scholars first, and heroes of the struggle against Holocaust denial; Jeffrey Herf, Esther Webman and Matthias Kuntzel who unearthed the evidence connecting Nazism to Islamism; Nora Gold and Phyllis Chesler who experienced and analyzed the back-stab of antisemitism in the feminist movement; the heavyweights of German anti-antisemitism; experts in Muslim, Islamist and Iranian antisemitism; veterans of Durban; the chroniclers of today’s British antisemitism, Shalom Lappin, Paul Iganski, David Cesarani, Michael Keith, Barry Kosmin and Mike Whine.

There were things wrong with YIISA but they should have been put right rather than mobilised as reasons to close it down. An interest in contemporary antisemitism is increasingly regarded as an indicator of vulgarity, dishonesty and selfish Jewish nationalism. Yale should have resisted this menacing anti-intellectual zeitgeist, not lent its own reputation to it.

Sometimes Americans have thought of the “new antisemitism” as an overseas phenomenon of degenerate Europe. Some American Jews, who had felt safe from antisemitism, will now be hurting.